Searching for the scriptures

The Bible is generally regarded as the most influential book in the world, and is consistently among the best-sellers. Whether that is for good or ill is less certain—it may sell well, but it doesn’t seem that all of the buyers read it, as this meme reminds us. And when it is read, disputes about how to understand it are nothing new, as church history tells us. Many forget the principle of starting from the larger view and moving on to the details, and get lost in the proverbial forest because of the trees.

Armstrong takes a larger view in this book, first by including the other scriptures of the world, and linking them to historical developments. This method of surveying of Hebrew, Christian, Greek mythology and philosophy, Hindu, Muslim, Sikh, and Chinese writings produces fascinating insights and parallels. This approach views sacred texts not primarily as instruction manuals, but as prods to seek that which is behind our great questions. In this, she would seem to agree with the classic view that divine matters come to us as an enigma, understanding comes from seeking truth, imbued with a sense of wonder (Plutarch, De E Apud Delphos 384, 385). 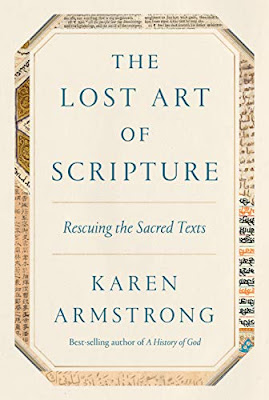 This quest to pursue an enigma engages both sides of our mind. Failure to understand this, along with the role of each of the two sides, leads to an imbalance that is literally killing us. It is multiplied when listening to those who cherry-pick completely non-representative passages from scriptures and use them to characterize their prejudices in a way that leads to increasing strife and misunderstanding.

Regaining the balance of the two sides gets a lot of attention here, and to me, it’s the best part of the book. Neurology tells us that the truth behind Plato’s cave parable (Republic 514a-520a) is reasonably accurate: we don’t have direct contact with the world. What we do have are perspectives gained from our senses, which are only representations of reality. Our mind’s left side senses linear, scientific ideas, while the right side deals with relationships and a desire for justice, as well as unity. The right is also more attuned to “other” and “Other.” Armstrong maintains that the right side is where prophets, speaking poetically, expressed their scriptural insights, and that the prophets have been among the few to integrate that with the practical left side. However, in today’s world, a scientific mindset has upended the balance, and seeks to define (i.e., set limits to) the infinite, thereby containing it.

Scripture, in all faiths, is a product of civilization, which is also a science (a body of knowledge which requires specialized skills and training), but it is also an art. As a sacred text, often divinely revealed, it is authoritative. But it is also something that lives in the right hemisphere of the brain, the land of music and poetry. It does not “mean” anything as such, but is meaning itself (just as, some theologians state, God is being itself)—and as Armstrong writes, like all religious language, it “must eventually segue into the silence that is an expression of awe, wonder and unknowing” (68).

The origins of scriptures are not in writing, but in performance—singing, reading, acting, and liturgy, and thus it requires interpretation, the same as a musical score. It is not intended to confirm a stance, but to challenge and call for transformation. A note on writing: as Armstrong notes, while known in the ancient world, writing was unwieldy and used as a memory tool or for records. It was not intended for daily use or, and it was understood that one who studied the stories knew them by memory (Plato, Phaedrus 274c-275b). We can also note that this approach, evidenced by quoting the first lines of a passage, is found in the Gospels and Epistles.

However, since the Enlightenment, especially in the West, everything, including scripture, is increasingly read with a scientific approach instead of a spirit of wonder and enigma. Its byproduct, the Reformation, celebrated the written word and sought clarity and definition.  Armstrong doesn’t note the irony of the “law of unintended consequences” here—the Reformation spawned not only this attitude, which has befuddled the meaning of scripture, but also set off demands for personal and political freedom which came to haunt religion and the governments that established churches supported.

Armstrong concentrates on a shift from scripture as a prod to radical change to using it as proof-texts for what becomes an increasingly smaller view of the world. One of the casualties of this search is the insistence of Augustine (among others) that scripture taught only love of neighbor. She notes that the Chinese philosopher Fang Yizhi (1611–71) wrote that this misleading, mechanistic approach created a West that is “detailed in material investigation … [but] deficient in comprehending seminal forces” of the ineffable (390, Fang Yizhen, Wu li xiao, 1.25a, 1.6, 12a). As the doctrinally-centered approaches which this pursuit results in increase, there is a loss of transcendence, which leads to self-serving justifications that are cruel, divisive, and complacent. In this regard, Darby is little different from Qutb or many others today: scripture is read to confirm one’s views rather than to seek transformation. If more people read the scriptures with a seeking attitude, there would be a lot less disability exclusion and a lot more acceptance in a shared, inclusive journey. Scripture is incomplete when, as the United Church of Christ suggests, we place a period where God places a comma.