The Jungle of Gender

A review and thoughts about James Essinger and Sandra Koutzenko, Frankie: How One Woman Prevented a Pharmaceutical Disaster (North Palm Beach FL: Wellspring, 2019)

Many people will remember reading Upton Sinclair's The Jungle in school. The book, which tells the story of an immigrant family who are taken advantage of at every turn, gained fame for something else: its descriptions of food processing, which led to the author's comment that he had "aimed at the public’s heart and by accident hit its stomach."

Today, as we witness gender disparity, disability discrimination, and political manipulation of public agencies in the face of Covid-19, there's another such story lurking in the life of Dr. Frances Oldham Kelsey (24 July 1914 - 7 August 2015). Better known as “Frankie,” Dr. Kelsey, M.D. (note that, ye purveyors of academic and gender nonsense), has faded from public recognition, but in her lifetime, she stood out as a government employee who faced down pressure from corporate chiefs as well as other government agencies. When she was, by random assignment, given the task of evaluating a new drug for approval in the United States in 1960, she found numerous problems with the studies, and the responses did not satisfy her. As she probed deeper, she found more problems, and thereby stopped a short-sighted approval of a drug now regarded as dangerous—thalidomide.

The story itself is of interest in understanding how regulations should work, and how other forces try to shortcut them. There is some scientific discussion, but it ought to be within the province of anyone who has passed biology in high school (although sometimes, seeing posts on social media, I think this might be worth more worry). The style is not academic—it is a journalistic report, replete with comments about corporate greed. Much of this seems to be in hindsight, and it sometimes forgets the workings of scientific method, but this does not detract from its insights. 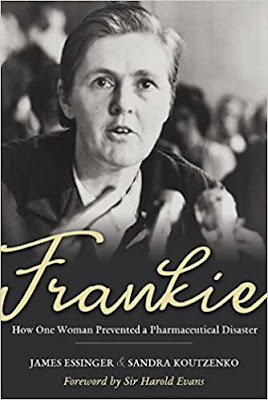 Reading the book also brought to mind a number of cultural points. The first is the treatment of women in the professions. Her given name, Frances, is often confused by those who have lost track of their Latin declensions and gender markers; added to this was being known almost everywhere as “Frankie.” As a result, she received an invitation to the University of Chicago from a man who felt that women were not able to handle science. To avoid embarrassment, the university was forced to accept her. And her concern for drug effects on pregnant women was also roundly ignored by many men in the field.

There’s also a section on the origin of pharmaceuticals in modern life, which includes how Germany became an early leader it the field—from a combination of Nazi experiments and a way to rebuild the post-war economy. And if one follows the thread, there’s a good bit here about the influences of greed, communication delays in a pre-internet world, and bad translations.

In November 1961, the first reports of birth defects from thalidomide became public. One of the results parallels that of Sinclair: legislation that required the FDA to provide more comprehensive safety studies before approval of a drug, and other regulatory powers such as the ability to order the withdrawal of a drug if the need arises. Safety did come to the fore, and while the people were heard, in the long term, much of this has been lost.

Historically, the lessons of this book include the need in today’s atmosphere to understand the historical background of laws, including regulatory agencies. Another area addressed are recent measures that have been taken to compensate thalidomide victims. This is mostly in Europe and the U.K., as thalidomide was not approved here and its use is strictly regulated today. But neither across the pond nor here has the cost of living with any disability been given adequate consideration. Social and employment discrimination, marriage restrictions, disability insurance payments, the high cost of care and adaptive devices, all remind one of the exploitations which Sinclair addressed. While the remedies of his time and the 1960s rightly needed to be handled, there remain serious problems today.

Disclaimer: I borrowed this book from the Indianapolis Public Library, and promised to return it by the due date, which I have done. On my checkout receipt, the Library informed me that I've saved about $400 by using their services through the year. So its no surprise that Amazon and others have proposed ending them.

Posted by Tim Vermande at 12:58 No comments: