A box for God

Human understanding often accepts received assumptions as something contained in a box. Inside the box is truth that is beyond examination, and thus cannot be tamed or controlled. “God” is a case in point. Moses tried this at a bush and lost. But he was not alone: years later John Wesley continued to ask if people would limit God. C. S. Lewis explores such limits in his less-well-known Space Trilogy, as a character states that "the laws of the universe are never broken. Your mistake is to think that the little regularities we have observed on one planet for a few hundred years are the real unbreakable laws, whereas they are only the remote results which the true laws bring about more often than not, as a kind of accident" (C. S. Lewis, That Hideous Strength, in The Space Trilogy, New York: QPBC, 1997, 710), again reaching outside the box. Thoughtful study with the brains God gave us should lead to thinking about something too big to be one thing, and to conversation and exploration rather than categories of control. 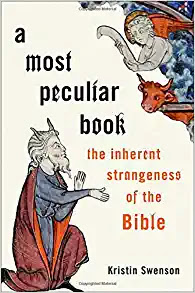 Kristin Swenson engages in this process in her recent A Most Peculiar Book: the Inherent Strangeness of the Bible (Oxford University Press, 2021). A book that contains “lofty wisdom, inspiration, comfort, and guidance” also contains “bewildering archaisms, inconsistencies, questionable ethics, and a herky-jerky narrative style” that is often made worse by similar tactics from translators. The crux of it all is that “God . . . is simply far more complicated than these reductive efforts can sustain” and “far too big to be just one thing” (xii-xv). And back to where we started, compounding this is that much of what we think we know is a collection of received assumptions, interpretations, traditions, music and other arts, and simplified stories told to children (xvii).

Like Dietrich Bonhoeffer's “cheap grace” that makes religion a market commodity in keeping with much of American culture, Swenson refers to “cheap faith” that reflects this god-in-a-box attitude of a power to be controlled and manipulated, as Moses tried to do at the burning bush. As a collection of books, authors, reflects cultures and practices in languages that are quite different from today’s, the Bible still invites us to explore as an act of faith  (36, 57, 101). 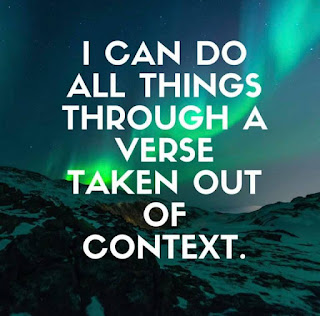 To get beyond this, a good beginning is to approach the Bible and not assume that we know what it says and let it speak to us. Doing this recognizes that the Bible is diverse, and requires the use of all of our faculties in the same way we are to love God (231). In doing that, we ought to rethink received traditions and interpretations in light of new knowledge and experience. People with disabilities will be familiar with this idea. The Bible repeatedly enjoins us to fair and equal treatment, but in its pages we can also see the persistence of outcasts created by stigma and discrimination. The old notions about disability still keep God and all of us boxed away.

We might ask who the outcasts are as well as how those people came to be outcasts. We might also ask why a book that asks us to think of everyone as our neighbor has been taken by some to allow—if not command—discrimination. The teaching of Jesus about disabilities would be a good lesson. We see that he does not wipe out the old—rather, he reminds us of what the Torah and Prophets mean without the accretions of traditions from culture. Jesus repeatedly included people with disabilities in his work, and went so far as to restore them to society. And he never sent them a bill, told them to start a Go Fund Me, complained when their debts were remitted, or sent them home hungry. The Zen-like and Moses-comprehending Jesus hasn’t changed.

This hit home after reading a recent CBC opinion article about October’s disability employment awareness month: a tale of being told someone can’t do a job, without even a cursory evaluation. The medical model of something being wrong with the person, rather than the limitations of facilities, results in pervasive ableism. This box of ableism is compounded in churches by not considering what the Bible really tells us and an unwillingness to confront cultural attitude. The truth will set us all free, but we have to explore beyond the boundaries of the box of cheap grace. That, again, is the kind of thoughtful study using the brains God gave us, but it also requires conversation, not the imposition of control.

Disclaimer: I borrowed this book from the Indianapolis Public Library, promising to return it within three weeks, which I did, even though they no longer threaten to fine late returns. In this I was aided and abetted by borrowing it as a Kindle book, which is automatically returned. They also kindly reminded me that by using my library card, I have saved over $700.

Posted by Tim Vermande at 12:31 No comments: