A review and response to Dennis R. Edwards, Might from the Margins: the Gospel's Power to Turn the Tables on Injustice (Harrisonburg Virginia: Herald Press, 2020).

As every year draws to a close, Lake Superior State University issues a list of words that should be banished from use . I watch for it with generally fulfilled hope that we might find respite from banal, overused, and oxymoronic language. But one word that stands high on my personal list has yet to make it to this esteemed group: I’ve long been tired of “empowered.” It’s not the idea of empowerment that bothers me, it’s the paternalistic and hypocritical way in which the word is usually used. Only rarely are pronouncements about it accompanied by true empowerment—usually it means that responsibility for things that go wrong has shifted down, but not the authority to change the patterns that caused the problems.

So I rejoiced when, early in the book, the author stated “I no longer use such language. The power of the Gospel comes from God, not from other humans—particularly not from those who fear losing control and influence” (31). It is those who fear losing control who use these tactics the most, as a soporific to make others think they’re getting somewhere. 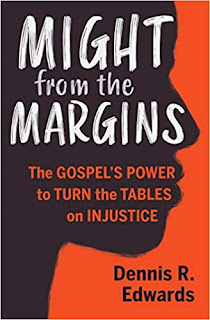 This book explores various aspects of power within the gospels in relation to the church. Edwards focuses on racism as an African-American, but notes that many other abuses exist: he explicitly extends its reach to patriarchy, wealth, and being physically attractive or able-bodied. This group includes the people who typically are at the top layers of social stratification, and they also typically view their position as resulting from their own work or strength, or flowing from a sense of divine right. Later in the book, Edwards extends the traits to include charisma and extroversion, which work together to create an atmosphere of self-promotion. This is a close relative of social Darwinism, a self-justifying ideology that turns away from the idea of adaptability as a virtue in favor of survival of those who label themselves the fittest. It’s odd that those who champion the use of Darwin as a social phenomenon are often those who deny Darwin’s thoughts elsewhere, but such is how things often go.

The gospels call us to freedom. But too often, the gospels are used to construct misleading readings that justify our prejudices and the systems that support them. The gospels are a story of empowerment, but have been turned from a story of outreaching grace into a series of propositions and rules that one assents to. Did you dance? Out. Did you go to the movies? Out. Were you born with a disability? Oh, my, what sin are you hiding? Did you give someone a quarter? Oh, good. Did you think about the reason why that person needed the quarter? We won’t talk about that.

Into this breach between grace and practice step the prophets, who see behind the world's glamor and status symbols. Prophets point out injustice as they call people to hear God. They call for action, because the well-being of God’s children is endangered, and they are angry, because things are not right.

Prophets call to us across the ages. The Negro spirituals are a historical example: they connected slaves to the biblical story, and found a way to live in faith with a God who promised deliverance for those who lived as chattel. Their songs still offer hope to everyone who is marginalized. In this light, I  think of the ability to discern a different, more honest reality during this “Autism Awareness Month.” These prophets have a message that we comfort ourselves with that “awareness” that tries to avoid “acceptance.”

Prophets offer hope. This includes hope for many whose disabilities mean that their “bodies struggle in environments not designed for them” (139). Those who are disabled, whether physically or otherwise, along with others who experience suffering, are the ones who can truly understand hope. Hope is not, as Edwards reminds us, a vision held by an affluent teenager in some bedroom community who hopes for a Lexus on her birthday. Hope comes from those who live with the painful realities of life, those who are also the ones who can understand what renewal is like, what it is like to be where God intends.

If this idea strikes a chord and you see this in time, the Methodist Federation for Social Action and the Association of Ministers with Disabilities are sponsoring a discussion with Kathy Black, one of the first theologians to take on ableist misreadings of the gospels in her book A Healing Homiletic. It's on April 17, 2021, and you can check it out here.

Disclaimer: I borrowed this book from the Indianapolis Public Library, with the understanding that I would return it in three weeks, which is exactly what happened. I also notice that they have now ordered six more copies. Empower on!