Still marked: a review and response to Jenifer L. Barclay, The Mark of Slavery: Disability, Race, and Gender in Antebellum America. Urbana: University of Illinois Press, 2021.

In 1857, a writer praised the New York Daily Times for teaching “coldly and calmly” the “indubitable fact” of white supremacy. As his opinion letter continued, he noted the need for “wardship” of those incapable of self-government, which included infants, disabled people, and people of color (J. Buford, “A Southerner’s Opinion of the New York Day Book,” New York Daily Times, 26 January 1857, 14).

The “indubitable fact” and its reach is a reminder of Douglas Baynton’s observation that, as a culture of “normal” was taking root, one response that might be heard was that one was not disabled and therefore ought not to be the object of discrimination—but not to challenge allowing discrimination.* At a time when many social institutions and assumptions were under scrutiny, various standards were emerging, with results that are still with us. Among these were supposedly Christian notions of sin as a contributor to difference. Although starting to give way to developing science and concepts of what was “normal,” prevailing notions held back from a clean break: judgments continued a long-standing practice of ascribing various aspects of disabling conditions to unrelated occurrences and then used them to justify oppression and inequality. In turn, such uses contributed to notions of disability as defective or abnormal instead of aspects of diversity.

Economics is the first topic covered. The author shows how disability has led to a presumption of lack of economic value. Under slavery, with its poor working and living conditions, accidents, and disease, an image of uselessness therefore became associated with disability. This idea returned in Nazi Germany to justify the murder of disabled people. 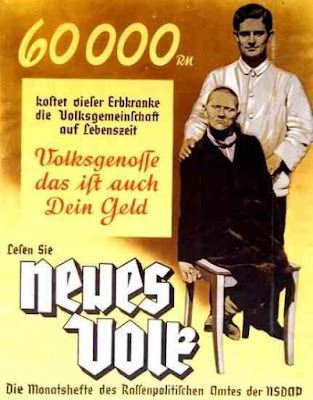 The next topic is medical advances, some of which led to what we now refer to as the medical model of disability, one which views differences as errors or imperfections to be corrected. The people involved were viewed as feeble objects of charity (have you seen a commercial or telethon lately that portrayed disabled people like this?), and provided ground for the view of slavery as a paternalistic “positive good” that took care of those unable to rise higher.

In many settings, these attitudes of uselessness lead to subversion: slaves and disabled people gather unnoticed and largely unmonitored, engage in various kinds of aid, whether practical or creating a sense of stability and social togetherness in a liminal setting. St. Paul’s paradox of strength in weakness became a recasting of weakness as strength, transforming the classical trickster of myth into a powerful person with qualities of great spiritual strength. Disability is capable of being subversive when it gains attention. However, it’s generally minimized or shut out. Ever wonder why?

Thus arises the author’s point that one failure of abolitionists who crusaded against slavery was not severing the link of racism and ableism behind social hierarchies (150). In an example of the “law of unintended consequences,” these anti-slavery arguments used ableist language to reinforce the need for perceived benevolent guidance, and outsider-directed care. This continued with speech about a deformed nation that reinforced a stigma of disability, and as noted, contributed to inspiration porn and obstacles today. Sympathy and derision went together to minimize and marginalize anyone who was different. Aided by the then-new art of photography, freak and minstrel shows worked with photographs of slave treatment to create sympathy without empathy or improvement for those in need.

Disability is also a “marker of hierarchical relations”— just as slavery, forged in distinctly racialized ways throughout the antebellum years—shaped and defined power dynamics. But what persists is not an end to hierarchies, but new paths of control. Disability continues to provide images and symbols of such control—a person perceived as successful has traits associated with bodily ability and seeks to reinforce such stereotypes. People whose bodies or minds do not match the standard are judged as unable, unintelligent, and irrational. They are shut out of inaccessible locations, forgotten when podcasts are not captioned, overlooked when their minds take a different approach, and only grudgingly granted an occasional presumption of competence. Still subversive, still a threat. Still marked. 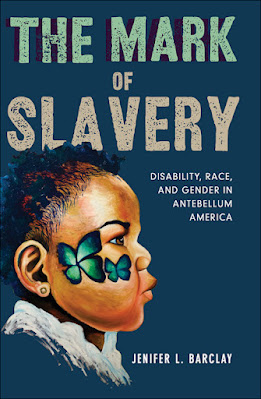 Disclaimer: I borrowed this book from the Indianapolis Public Library, promising to return it within three weeks, which I did, even though they no longer threaten to fine late returns. In this I was aided and abetted by borrowing it as a Kindle book, which is automatically returned.

Posted by Tim Vermande at 14:04 No comments: