Traveling with an atlas

It was in second grade, I think, that everyone in my class received a state map. We didn’t do much with it, but it was a fold-up wonder that opened a new world. Looking at it, I saw where we lived, places nearby that we sometimes traveled to, and places further off that sounded fascinating. Thus began an interest that developed as I pursued historical studies—learning how geography has had an integral role in shaping events, and growing in understanding how others live.

As I moved into a major of religious history, it seems natural to say that Bible atlases were along for the journey. More so than for many other books, one is needed here—its events take place in a generally unfamiliar land, there are often varying accounts of an event, as well as different names than other sources use, and other problems that challenge a reader. Bible publishers have responded with maps bound in with the text, but they are often dated and require flipping pages, so a stand-alone version that can sit next to one is a useful resource. Mine received a lot of use; I suspect I’m not alone in wearing out copies of the Oxford Bible Atlas just in time to buy a new edition.

While the Oxford atlas remains a good choice, this recent offering from Fortress provides worthy competition. In general, each page has a section outlining the text references, books or chapters and background on one leaf. Opposite that is a map illustrating the geography and movements involved. There are five sections that flow chronologically: Beginnings, The People of Israel in Canaan, A People Divided, Invasion and Occupation, and Jesus and the Emergence of Christianity.

I mention this organization to remember one of my seminary professors who remarked of one paper that simply being aware that the book of Jeremiah is not in chronological order is useful. The Hebrew Bible is organized by themes – Torah, Prophets, and Writings. While the role and places of the prophets are often missing here (which I see as the book’s greatest lack), the whole does a good job of helping make the storyline of the Hebrew Bible clear.

The Christian scriptures start with five books that are only vaguely in chronological order (like the Hebrew records, a trait that often frustrates modern western readers), and often alludes to events that are obscure. It then pries into someone else’s mail, often conjoining the letters and obscuring the background of events. Here the layout and background are again useful.

Overall this approach is helpful as the authors relate the biblical stories to other historical events, thus removing some of the “bubble.” It’s easy to forget about the wider world, one that is only tangentially mentioned most of the time. Another helpful feature is reference to archaeological findings and what they tell us about the story. Archaeology doesn’t “prove” the Bible, but it does tell us a lot about the background of the stories, and thus help us understand it. The section “Invasion and Occupation,” dealing mostly with the inter-testamental period (when much of the Apocrypha were composed) is particularly good in helping to understand the political movements which led to the tensions, situations, and parties of the Gospels. 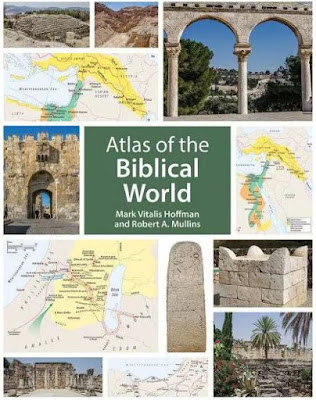 In summary, then, this a very effective tool for understanding. It’s not the most comprehensive, but that isn’t the goal. It’s factual, which means that some of the popular legends aren’t included, but that’s fine with me. Mark Twain wrote in the conclusion of his rollicking book The Innocents Abroad that “travel is fatal to prejudice, bigotry, and narrow-mindedness.” It also is fatal to fakery (something Twain remarks on a lot in that book!) and expands horizons and knowledge. You may well find me online, looking at Google maps (especially with the new accessibility features, but stretching our boundaries also includes a good book of this sort.