Recently, disabled people and advocates have been speaking about another “ism” that diminishes people—ableism. As I have joined with others in explaining, ableism makes false assumptions about disability and leads to discrimination and exclusion. So I am pleased to join the Psalmist and be glad to enter this house of the Lord and share some thoughts about reading a new book:

Kenny, Amy. My Body Is Not a Prayer Request: Disability Justice in the Church. Grand Rapids, Michigan: Brazos Press, a division of Baker Publishing Group, [2022]. 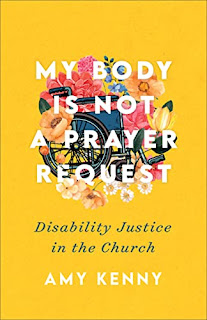 Gustav Mahler described the final movement of his first symphony as the cry of a wounded heart. This book is a similar cry—more than once, Kenny states that she is screaming. The stormy dissonance of the opening of the movement is reflected in Kenny’s first page as she tells of an encounter: “God told me to pray for you . . . . God wants to heal you.” Like Kenny, many of us have been there as the ultimate ableism loads presumption upon presumption and tops it with a divine imperative.

These early chapters are hard, because the scream story continues with more recitations that will be familiar to many people with disabilities. Like much racism, ableism lurks in structures beneath the surface, formed on a foundation that we often overlook. Accommodations are considered an add-on, a patch to the structure, not an essential of design.

The implied statement of ableism is that something must be fixed, that people with disabilities are not whole, and that our faith is lacking. This leads the author to state that the real need is to be freed from ableism. In the same process as outlined by Beth Allison Barr, where cultural notions create faulty theology, we see a chain of thought: disability makes people uncomfortable, leading far too many to presume sin lies behind it, with the result that scripture is twisted to fit presumptions while overlooking the passages that don’t fit those cultural notions.

Culture teaches us that people are valued for their productivity, and disabled people are not productive (and if they are, they require costly accommodations and extra time). We are “ministered to” instead of “with,” reinforcing a segregated second-class status, and silenced from instructing others. When the ADA was adopted, some churches strongly opposed it, and many are still not compliant or accessible (or when they are, clumsily so). It’s a sign that disabled people are not considered fully human, which both picks up from and contributes to eugenics.

What to do then? After Mahler’s cry of wounded despair, hope emerges in themes of contemplation that transform the despair. Kenny finds hope in disabled people who, among all others, can best grasp that Jesus shows the way to transformation. His call to μετανοια has urgency. Although generally translated “repent,” which has become a religious buzzword with no more meaning than empowerment or some of the other corporate gibberish that has infested our language, its call is to renew the mind, to transform our ways. Instead of the medical model of fixing things, she asks us to embrace disability and use that model in interpreting Scripture. In this light, the healing narratives are not about cure and eradication, but restoration and acceptance. Old stories gain new life: Jacob is changed from a schemer to a forgiving Israel with a limp.

In these and many other examples, we come to understand interdependence in a renewed and transformed society. Accessibility becomes the beginning point, not a destination or a checklist. All of creation is good; and our eschatology is also transformed: Micah says that God will gather the lame and those who have been driven away.

Mahler is a “heavy” composer of deep themes and subjects, but he has his own kind of wit if one will hear. So does Kenny—and it is copious, and often directed at the medical model. Referring to cayenne pepper ointments, she writes that they only made her hunger for a vindaloo curry; or that despite x-rays and radioactive injections, she never gained superhero powers as Marvel stories might lead one to believe. Turning her sights to the Bible, she states that the description in Daniel 7.9 sounds like “a wheelchair to me, and one that gives new meaning to burning rubber.” Ezekiel 1.15-21 describes God with a massive mobility device that is lifted by four angels with fused legs and colossal wheels that encase wheels that glisten like topaz. If God uses a fiery, shimmering, turquoise wheelchair why shouldn’t we?

Ableism, with its cultural roots, is often selective. In one example, she asks if people with eyeglasses have been targeted for prayers of cure. John Calvin even attributed their design to science and learning as a gift of God that correct natural changes, while leaving other devices (such as mobility aids) to the realm of differences resulting from the corruption of sin. (Selective ableism note: of course, he needed glasses for himself. There’s an interesting YouTube video exploring this idea). Why can’t these other adaptive devices become mainstream, and even display a little fashion? But then, as Kenny writes, it is human-made stuff that is orderly (especially for lawyers-turned-theologians), while God’s canvas of creation is wild, unruly, and exquisitely messy.

In the end, Mahler finds a sort of peace. It is somewhat defiant, especially near the end, as he directs the horn players to stand and point their bells outward. He later went on to write several more symphonies, each of which explores an aspect of transformation, of finding peace, of living with meaning in an exquisitely messy world. I look forward in hope that Kenny will also grace us with more of her thoughts and findings as well.

Disclaimer: I borrowed this book from the Indianapolis Public Library, once again to the consternation of someone, I'm sure. The only stipulation was to return it within three weeks, which I did.